Call of Mary Sanctifier to the Shepherds of the Home. Message to Enoch

Shepherds of the Home, You Are Responsible Before God, for the Loss of Your Homes! What Are You Waiting for to Straighten the Course of Your Families? 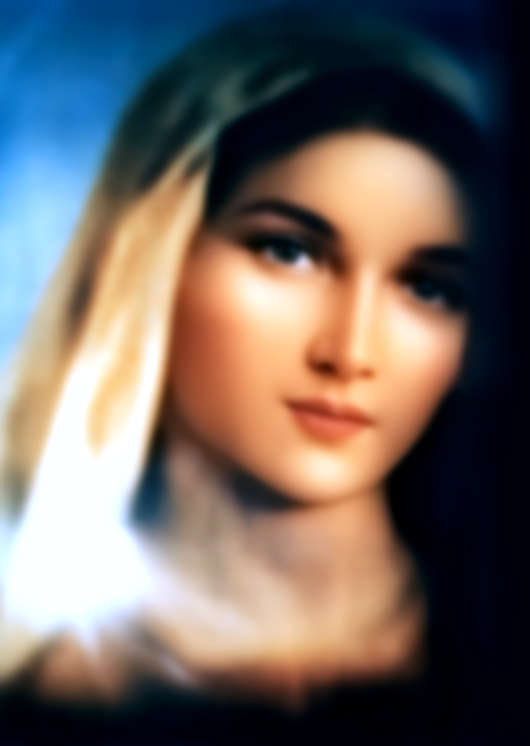 My Beloved Little Children, the Peace of my Lord be with you all.

Little children, gather around your Mother and let us pray together my Holy Rosary, asking the Heavenly Father for the salvation of the sinners of the whole world. Little children, the sins and the wickedness of this humanity of these last times, makes Heaven weep. Thousands of souls are lost daily by the alienation from God and by the modernism of this world, which is destroying faith and fear of God.

Worldly cares and worries and the desire to have and possess, are absorbing humanity; the lack of prayer, the non-fulfillment of the Divine Precepts, pride, materialism, lack of charity and the desperate search for the god of money, is leading the men of these last times to lose moral, social and spiritual values. The Spirit of God is being displaced by worldly gods.

Many homes and families today are adrift because of the lack of commitment of many parents to God and their children. My children are being lost to modernism and the god of technology, which is stealing the spaces of prayer and dialogue in homes; the vast majority of home pastors today are more concerned about satisfying the material needs of their children and their homes, than giving love; they are neglecting the moral and spiritual orientation and education of their families, to go in search of the god of money. There are few homes and families where there is prayer and dialogue, where time is taken to listen to the children and to know their needs and concerns.

The Commandments of the Law of God, today are forgotten matter in the heart of many families, daily they are broken because in the homes the parents of family forgot to evangelize with them. Do not forget that the decadence of societies has its origin in the family, because the family is the first society created by God, from which all other societies are born. You do not know how sad I am, my little ones, to see the destruction of many families, for the lack of God in so many homes and for the lack of love and commitment of so many parents to their children.

My adversary with his spirits of division, lack of love and rejection, is destroying many homes; homes where the Spirit of God has been displaced by the gods of this world, are homes that my adversary will destroy. I tell you my little ones, a home where there is no prayer and consecration to Our Two Hearts, will be a home that will be lost when the days of the great tribulation are unleashed. Pastors of the home, you are responsible before God, for the loss of your homes! What are you waiting for to straighten the course of your families? Take up again the teaching and fulfillment of the Divine Precepts; make room for dialogue and prayer in your homes; consecrate them to Our Two Hearts and do not let go of the recitation of My Holy Rosary, so that the Spirit of God may once again dwell in them! Remember: The days of Divine Justice are beginning and if God is not in your homes, it will be the spirit of evil that will take possession of you and your families and there will be no turning back.

May the Peace of my Lord accompany you always and may my Maternal Protection free you from all evil.

Make known, little children, the messages of salvation and my seven Hail Marys, to the whole world.

The Most Holy Rosary

The Blessed Virgin Mary grants seven graces to the souls who honor her daily by saying seven Hail Mary's and meditating on her tears and dolors (sorrows).

The devotion was passed on by St. Bridget.

HERE ARE THE SEVEN GRACES: 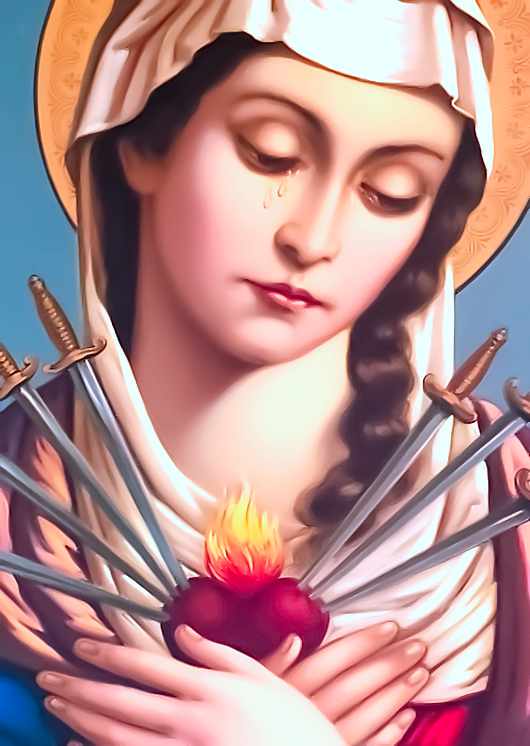 I will grant peace to their families.

They will be enlightened about the divine mysteries.

I will give them as much as they ask for as long as it does not oppose the adorable will of my divine Son or the sanctification of their souls.

I will defend them in their spiritual battles with the infernal enemy and I will protect them at every instant of their lives.

I will visibly help them at the moment of their death, they will see the face of their Mother.

I have obtained from my divine Son, that those who propagate this devotion to my tears and dolors, will be taken directly from this earthly life to eternal happiness since all their sins will be forgiven and my Son and I will be their eternal consolation and joy.

1. The prophecy of Simeon: "And Simeon blessed them, and said to Mary his mother: Behold this child is set for the fall and for the resurrection of many in Israel, and for a sign which shall be contradicted; And thy own soul a sword shall pierce, that out of many hearts thoughts may be revealed." – Luke II, 34-35.

Meditation: How great was the shock to Mary's Heart at hearing the sorrowful words, in which holy Simeon told the bitter Passion and death of her sweet Jesus, since in that same moment she realized in her mind all the insults, blows, and torments which the impious men were to offer to the Redeemer of the world. But a still sharper sword pierced her soul. It was the thought of men's ingratitude to her beloved Son. Now consider that because of your sins you are unhappily among the ungrateful.

Meditation: Consider the sharp sorrow which Mary felt when, St. Joseph being warned by an angel, she had to flee by night in order to preserve her beloved Child from the slaughter decreed by Herod. What anguish was hers, in leaving Judea, lest she should be overtaken by the soldiers of the cruel king! How great her privations in that long journey! What sufferings she bore in that land of exile, what sorrow amid that people given to idolatry! But consider how often you have renewed that bitter grief of Mary, when your sins have caused her Son to flee from your heart.

3. The loss of the Child Jesus in the temple: "And having fulfilled the days, when they returned, the Child Jesus remained in Jerusalem; and His parents knew it not. And thinking that he was in the company, they came a day's journey, and sought him among their kinsfolk and acquaintance. And not finding Him, they returned into Jerusalem, seeking Him." Luke II, 43-45.

Meditation: How dread was the grief of Mary, when she saw that she had lost her beloved Son! And as if to increase her sorrow, when she sought Him diligently among her kinsfolk and acquaintance, she could hear no tidings of Him. No hindrances stayed her, nor weariness, nor danger; but she forthwith returned to Jerusalem, and for three long days sought Him sorrowing. Great be your confusion, O my soul, who has so often lost your Jesus by your sins, and has given no heed to seek Him at once, a sign that you make very little or no account of the precious treasure of divine love.

4. The meeting of Jesus and Mary on the Way of the Cross: "And there followed Him a great multitude of people, and of women, who bewailed and lamented Him." – Luke XXIII, 27.

Meditation: Come, O ye sinners, come and see if ye can endure so sad a sight. This Mother, so tender and loving, meets her beloved Son, meets Him amid an impious rabble, who drag Him to a cruel death, wounded, torn by stripes, crowned with thorns, streaming with blood, bearing His heavy cross. Ah, consider, my soul, the grief of the blessed Virgin thus beholding her Son! Who would not weep at seeing this Mother's grief? But who has been the cause of such woe? I, it is I, who with my sins have so cruelly wounded the heart of my sorrowing Mother! And yet I am not moved; I am as a stone, when my heart should break because of my ingratitude.

5. The Crucifixion: "They crucified Him. Now there stood by the cross of Jesus, His Mother. When Jesus therefore had seen His Mother and the disciple standing whom he loved, He saith to His Mother: Woman: behold thy son. After that he saith to the disciple: Behold thy Mother." – John XIX, l8-25-27.

Meditation: Look, devout soul, look to Calvary, whereon are raised two altars of sacrifice, one on the body of Jesus, the other on the heart of Mary. Sad is the sight of that dear Mother drowned in a sea of woe, seeing her beloved Son, part of her very self, cruelly nailed to the shameful tree of the cross. Ah me! how every blow of the hammer, how every stripe which fell on the Saviour's form, fell also on the disconsolate spirit of the Virgin. As she stood at the foot of the cross, pierced by the sword of sorrow, she turned her eyes on Him, until she knew that He lived no longer and had resigned His spirit to His Eternal Father. Then her own soul was like to have left the body and joined itself to that of Jesus.

6. The taking down of the Body of Jesus from the Cross: "Joseph of Arimathea, a noble counselor, came and went in boldly to Pilate, and begged the body of Jesus. And Joseph buying fine linen, and taking Him down, wrapped Him up in the fine linen." – Mark XV, 43-46.

Meditation: Consider the most bitter sorrow which rent the soul of Mary, when she saw the dead body of her dear Jesus on her knees, covered with blood, all torn with deep wounds. O mournful Mother, a bundle of myrrh, indeed, is thy Beloved to thee. Who would not pity thee? Whose heart would not be softened, seeing affliction which would move a stone? Behold John not to be comforted, Magdalen and the other Mary in deep affliction, and Nicodemus, who can scarcely bear his sorrow.

7. The burial of Jesus: "Now there was in the place where He was crucified, a garden; and in the garden a new sepulcher, wherein no man yet had been laid. There, therefore, because of the parasceve of the Jews, they laid Jesus, because the sepulcher was nigh at hand." John XIX, 41-42.

Meditation: Consider the sighs which burst from Mary's sad heart when she saw her beloved Jesus laid within the tomb. What grief was hers when she saw the stone lifted to cover that sacred tomb! She gazed a last time on the lifeless body of her Son, and could scarce detach her eyes from those gaping wounds. And when the great stone was rolled to the door of the sepulcher, oh, then indeed her heart seemed torn from her body!